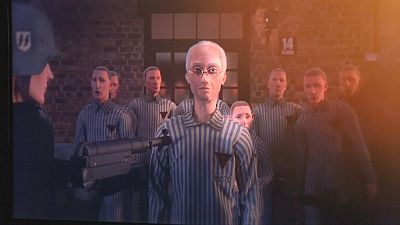 In Mexico City, 3D animators are bringing to life the story of a Polish World War Two hero. Maximilian Kolbe was a Franciscan monk, who volunteered to die in place of a stranger in the German death camp of Auschwitz

Dos Corazones is the company behind Max and Me, and the film is in the final stage of production.

Maximilian Kolbe was murdered in 1941 in place of Sergeant Franciszek Gajowniczek, a stranger to him.

Polish actor Piotr Adamcyzk will be the voice of Sergeant Franciszek Gajowniczek who survived Auswitz because of Kolbe’s sacrifice.

“Maximilian Kolbe’s life was like a testament to humanity”, said Adamcyzk. “Imagine that in the most hopeless places where Germans, or Nazis, showed such horrible cruelty he proved that there is always room in our soul, in our heart for boundless good, boundless love. Love conquers all, that is what he used to say and that’s a line from our film.”

Maximilian Kolbe was made a saint by Pope John Paul II in 1982. The monk protected and helped Jews from Nazi persecution for which he was sent to Auschwitz himself.

In July 1941 some prisoners escaped from the camp.

In revenge 10 male prisoners were chosen to be starved to death in an underground bunker.

When one of the selected men, Franciszek Gajowniczek, cried out, “My wife! My children!”, Kolbe volunteered to take his place.

Kolbe lived for two weeks but the guards wanted the bunker emptied, so they gave him a lethal injection of carbolic acid.

“Personally as a Pole I’m really very happy that this film is being made because it will make a difficult history of my homeland more understandable”, said Adamcyzk

Dos Corazones is a Mexican film production company dedicated to messages of faith and inspiration.

In 2006, the firms CEO, Pablo José Barroso, was inspired by Pope John Paul II’s call for new ways to evangelize.

That inspired him to to go into the film business to produce and distribute high quality Catholic films.

The story of “Max & Me” unfolds through a present day encounter between an older man, Gunter, and a rebellious DJ teenager.
Gunter uses the tale of Father Max to teach the teenager many lessons in love and sacrifice.

“Bit by bit we thought about whether it should be in live action or animated”, said Pablo José Barroso. “But what really called us to action was the true story of a priest who was an exemplary person and who dedicated all his time to try to preach using alternative means, and now with this new evangelisation in vogue, I think that he was 100 years ahead of his time.”

“Max & Me” will be dubbed into English, Polish and Spanish for its release with the movie’s premiere set to take place at the World Youth Day event in Krakow in 2016.