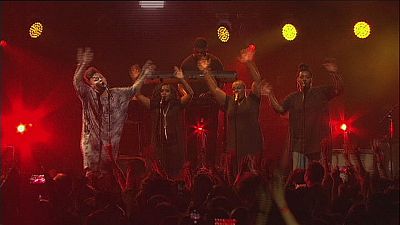 Sinead O’Connor hit the stage at the Montreux Jazz Festival.

The prestigious event is celebrating its 49th year.

O’ Conner delivered an eclectic set made up of some of her more popular hits mixed with songs from last years album, ‘I’m Not Bossy, I’m the Boss.’

The video for '8 Good Reasons' is finally here https://t.co/Xayrr8xgt4

John Legend wowed the crowd with ‘All of Me’ from his album ‘Love in the Future’ the singer/songwriter has a huge reputation to live up to after Quincy Jones dubbed the musician a “genius.”

We had so much fun at Montreux Jazz Festival tonight!!! Thank you!! https://t.co/gZfLsOVpTd

Lilly Wood and the Prick got the hoards boppin’ with ‘Prayer in C.’

Nili Hadida and Benjamin Cotto are fast becoming one of France’‘s most revered groups.

The R&B jazz-soul artist burst onto the scene in 2011 with the singles ‘Heaven’ and ‘Read All About It’, then won two Brit Awards in 2013 for her first LP, ‘Our Version of Events’.