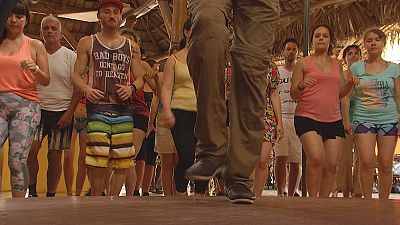 Bachata is to the Dominican Republic what jazz is to the United States of America. It is a genre of music but it is also a dance and a vector of emotions. It is said it is a way for Dominicans to express their joy, their pain, their suffering.

“In the Samana peninsula the Dominicans recall the history of this dance which is so popular in Europe,” explained euronews correspondent Raphaele Tavernier in the Dominican Republic.

“Actually there is a lot of Dominican people who still do not like Bachata because Bachata used to be illegal in the Dominican Republic and it was considered a vulgar and sensual dance that shouldn’t be danced by people of high class and it was very lowly to do it.

‘So there is still a stigma to Bachata and it is still isn’t as popular as the national dance which is Merengue. But it is growing more and more thanks to Romeo Santos and Juan Luis Guerra who have taken Bachata all over the world,” pointed out Rudy El Tiguere Director “Island Touch Dance Academy”.

Bachata has kept its authentic essence and evolved over a period of time. That has happened in several stages and in terms of its musicality particularly with the instruments.

“We started with three instruments, tambola, the guore, which was replaced by the guitar and maracasses. The evolution has resulted in different instruments today, five in all. There is the guitar, rhythm guitar, electric bass guitar, bongo and guira.

‘Today we see that little by little the music has changed and what we actually see in Europe is that more emphasis is put on the voice rather than the musicality,” explained dance instructor Samy El Magico.

If the music has evolved so too have the lyrics.

“Before the songs spoke of bitterness and disenchantment – he went to the bar and found his wife with another man and there was a problem , that’s how the song went. That is no longer the case. Today we sing of love. It’s much more romantic,” explained singer Joan Soriano.

Bachata has somehow become sweeter and also more commercial. The group Aventura a few years ago and now Romeo Santos and Prince Royce have contributed to its success beyond the borders of the Dominican Republic. The modern Bachata with its new musicality has in turn led to the evolution of the dance which varies from country to country.

“If you take for example the Spanish and the Italians they are sensual, their dance is very sexy. In France we tend to just mix everything and it is based on what is called “fusion” or “modern” but also sensual also plays a part.

‘And today if you visit the Dominican Republic you will see a Bachata which is much more authentic, simpler technically and more in the feeling and of the feeling,” explained David Riquelme Director “Scene Attitude” Dance School.

Sensual, Dominican, urban or fusion the range is wide.But there is one common movement to any style and crucial move