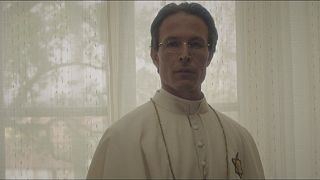 Tackling a controversy which has dogged the Roman Catholic church for almost 70 years. In “Shades of Truth” US actor David Wall plays Italian-American journalist David Milan who is of Jewish origin.

He is convinced that Pope Pius XII was indifferent to the Jewish problem during the Second World War.

The film will be presented out of competition at the Cannes Film Festival. It was directed by Liana Marabini

“Sometimes we do not want to speak the truth, the truth is not always easy to see or express. In the case of Pope Pius XII most people believe and still believe that he was the Pope of Hitler’s Gold and that is quite wrong. So I wanted this independent film, which I supported all alone – it was financed by my production house – to shed some light in this hidden corner which is full of shadows,” she said.

Pope Pius XII was the head of the Catholic Church from March 1939 until his death in 1958, leading the church during World War II.

Some historians contend he did not speak out strongly enough against the massacre of Jews. They maintain while he condemned the excesses of the war he did not put sufficient blame on Hitler, which some believe was in order to avoid aggravating the tyranny and exposing Catholics in occupied Europe.

“I say he was the Vatican’s Schindler but that is a mistake. Schindler saved only 8,000 Jews while he saved millions. I compare him to Schindler as well for the courage he showed and the risk he ran. He took a lot of risks in his position to help Jews and save them from death,” explained Liana Marabini

In the film David Milan meets some remarkable members of the clergy who help him through the complicated secrets of the Vatican. He studies documents and sees old footage about the World War II and the involvement of Pius XII.

Shades of Truth is one of several films to tackle the controversial period of the Catholic Church but it is the first to give a positive image of the Pope.