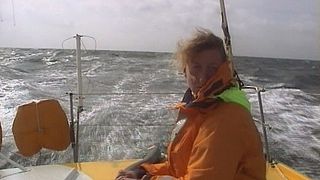 Journalist and sailor Catherine Chabaud became the first woman to complete a solo navigation of the globe without any stops during the third edition of the Vendee Globe race in 1996 – 1997.

Add to that 14 crossings of the Atlantic Ocean four of which were solo and you can understand why she has been referred to as the woman of the sea.

In Monaco, with the sea close at hand, at a glittering ceremony she was presented with the Woman of the Year Award. It is an international prize and celebrates women from diverse sections of society who thanks to their personal or professional actions have had a positive impact on their own lives or those of others.

“I have an emotional, very sensual relationship with the sea, very close to the sea. I think my passion comes from my childhood, when I was little. My dad was a diver who did spear fishing and he put a mask on me very early on and a snorkel. So I have seen below the surface of the sea it gave me a prior knowledge. Now I know about what happens in the depths like a sailor. I have a living relationship with the sea. I talked to it while I was sailing round the world, I spoke to the sea. It is my little mother.”

euronews: “Was your great adventure planned as a challenge to win a battle or the quest for harmony?”

‘In the South Seas for example there is magnitude. You have enormous waves and when the wind blows 50 to 60 knots in the storm the sea breaks, the crests on top of the waves pound and the sea is turquoise. In such cases it’s terribly beautiful and you really have to be composed and deal with it.”

In December this year 196 countries will meet in Paris in a bid to find an agreement which will commit to a sustainable reduction in greenhouse gas emissions.

Catherine Chabaud will be there as an ambassador for “Oceans and Climate” and as such believes a valuable solution would come from protecting the seas and the oceans.

“The conference in Paris at the end of the year is great but it is also a very serious time. It is not just a subject for countries. I actually think that it is a huge ambition for all states to meet the challenge of limiting global warming to two degrees. We chose two degrees. That is how to make sure we do not go to four or six degrees. It is of course the policies for countries but we also have a part to play, everyone. We all share the common fact that the oceans are our future and that is abslolutely the voice of Ocean and Climate in Paris 2015,” she concluded.