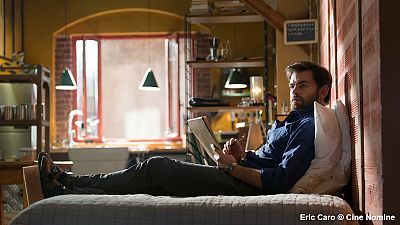 <p>Clovis Cornillac a celebrated French actor has just directed his first film. Cornillac is also the main character in ’Un peu, beaucoup, aveuglement’ a romantic comedy. The film tells the story of a couple who fall in love without seeing each other and conduct their relationship through a thin partition separating their two parisian apartments.</p> <p>The film is out in France on the 6 May, Isabelle Kumar caught up with Clovis Cornillac when he was in Lyon presenting his film.</p> <p><em>Trailer in French</em><br /> <iframe width="606" height="341" src="https://www.youtube.com/embed/ZYYafHsTEmc" frameborder="0" allowfullscreen></iframe></p> <p><strong>Isabelle Kumar, euronews: Tell me, it’s lovely and warm outside, why should I want to go into dark room inside and see your film?</strong></p> <p>Clovis Cornillac: It’s not me who’s said it, but I have been told a lot that people really enjoy seeing this film, that they have a good laugh, so if you want to laugh and good time go and see it – it’s a feel good movie.<br /> Spring is a time of year when everything feels possible and that’s the spirit of the film so it fits with the time of year too.</p> <p><strong>Isabelle Kumar, euronews: This is your directorial debut, would you say you have a style we can already identify?</strong></p> <p>Clovis Cornillac: That you will have to tell me when I have made more films. I think it is when you make several films that you begin to see common threads. I have only made one, but I did discover that it is an extraordinairy job that I am passionate about.</p> <p><strong>Isabelle Kumar, euronews: What made you want to get into directing?</strong></p> <p>Clovis Cornillac: It was something I had wanted to do, then it became a necessity to tell a story and be involved in every aspect of it. I didn’t necessarily want to act in it, what interests me in the cinema is creating this complete picture, choosing every shot, every zoom, the details of the decor, everything visual and auditory in the film – it’s you. It’s your universe, it’s something that you bring, that you build, your narration. That’s what is extraordinary in directing. Nothing is left to chance, everything has a meaning.</p> <p><strong>Isabelle Kumar, euronews: It might surprise some that you cast your wife, Lilou Fogli, in the role of an adulterous nymphomaniac?</strong></p> <p>Clovis Cornillac: For me she’s not a nymphomaniac, she’s bored, that’s the story for me. In other words, she represents a character in our society – who is beautiful, wealthy, has a good looking husband, beautiful kids, great apartment, but she’s bored. And you are not allowed to be bored when you have everything, that notion interested me. It’s not the fact that she’s sleeping with guys. It’s more, what do you do when you are bored and too scared to leave because basically you have everything.</p> <p><strong>Isabelle Kumar, euronews: Do you have a favourite scene in the film?</strong></p> <p>Clovis Cornillac: No, I can’t, because the whole principle, everything I enjoyed and the happiness I had making the film is down to the fact that everything is interdependent. So if there’s an explosive scene, it was because we built up to it, and that building up is as interesting for me as the climax.</p> <p><strong>Isabelle Kumar, euronews: Given this is the first time you have directed, are you particularly anxious?</strong></p> <p>Clovis Cornillac: Very. Very. My anxiety is as at about the same level as the joy I felt in making the film. When you direct, and you do it sincerely, you are naked and I have never been naked. An actor hides behind his roles, but I am everywhere. I feel like I am naked lying on the table and people are looking at me saying ‘Ohhhh look he’s hairy, ohhhh look that’s a bit ugly…’. You feel exposed and you can’t defend yourself, you say to yourself I am naked and I can’t defend myself.</p>