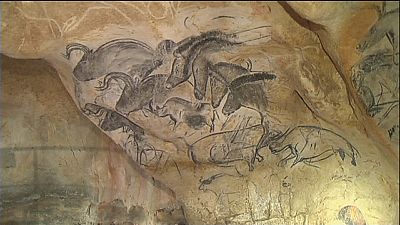 A replica of France’s famed Grotte Chauvet – a vast cave which contains the world’s oldest prehistoric art. – will be opened to the public this month. The 55 million euro project recreates the topography, temperature and artistic treasure from the original site.

There are more than 400 charcoal or ochre paintings of animals, hand prints and carvings.

Discovered during a private expedition in December 1994 by amateur speleologists Jean-Marie Chauvet, Eliette Brunel and Christian Hillaire the public has never been allowed in the original cave.

Inside is the most extensive and well preserved piece of heritage from the Aurignacian Era, between 30,000 and 37,000 years ago. It’s thought a rock fall closed the cave from human discovery for around 23,000 years, leaving it sealed until 1994. It was added to UNESCO’s World Heritage List in 2014.

Depicted over a distance of half a kilometre and occupying an area of 8,500 square metres there are 424 animals and 14 species portrayed on the walls.

A limitless palette, the first use of the stump technique, the use of overhangs, hollows, niches and alcoves in the rock to give relief and the mastery of perspective in the Chauvet cave – which is the most accomplished known to date for the Upper Palaeolithic period – continues to amaze experts.

The designers of the replica cave worked in close collaboration with the scientific team, the challenge was to reproduce the cave and its 8,500 square metres while at the same time maintaining the perception of the originals.

3-D modeling was used and some 6,000 images were overlapped in developing sketches. The paintings have been reproduced on a shotcrete structure with resin coating using natural oxide pigments and Scots pine charcoal.

All the paintings have been done by experienced artists using natural pigments and bonding material in order to remain as faithful as possible to the originals.

“The walls, the geology has been replicated exactly as it is and the paintings are also very precise. They can stir emotions. So I think the first reaction of the public will be amazement while I think they will also be surprised,” explained Professor Jean Clottes, Cave Art Specialist.

The Pont d’Arc Cavern will be opened to the public on April 25.