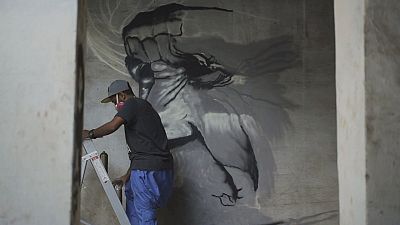 Street art in Saudi Arabia is spreading. The historical city of Jeddah on the Red Sea coast is fast becoming the place to be for the country’s urban art scene.

Almost half are actually women. They're girls who sort of like dress up as boys and go out at night, spray their work with maybe one or two friends to keep a watch.

For the exhibition “Inner Voices” some of the Kingdom’s most talented artists have contributed to a show that aims to bring art back to street level, accessible for all. But getting the artists together was like herding cats.

Curator and organiser of Inner Faces show, Raneem Zaki Farsi said: “Some are anonymous and some are not. And most of them come from all around Saudi. When we started the process, of course we were running around like headless chickens trying to figure out how to do this.”

“You know some are anonymous how are we going to find them? Trying to contact other bloggers who knew of them who have corresponded with some of these anonymous artists with anonymous emails,” added Farsi.

From the government’s point of view, contemporary visual arts remain problematic, as they might stir Islamist resentment and provoke the wrath of self-appointed guardians of the faith.

The Saudi government and many important institutions do, however, appreciate the positive PR effect the support of contemporary art has on international audiences. –

More and more women are active in the domain of street art in Saudi Arabia.

The latest example was when three female students, Boshra al-Ouda, Majd al-Harbi and Ayesha al-Barqi, stuck hundreds of posters across the capital Riyadh bearing the slogan “Art is Halal” to spark a public debate about the limits of freedom of expression in art.