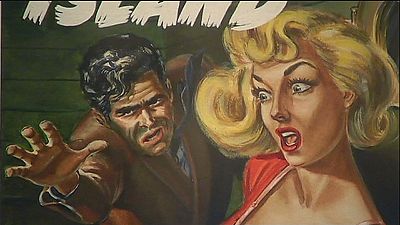 Dark, bright, bold and risky with a hint of sleaze and a touch of violence.

Australian pulp fiction from the 1940’s and 50’s featured artwork designed to lure the unsuspecting into the forbidden world of desire, and revenge.

A new exhibition at the State Library in New South Wales brings together some of the best pulp artwork from a bygone age.

In 1940 the Australian government was hit by a dollar shortage and as a result Australia started its own pulp industry.

Peter Doyle is a crime writer and curator of the Pulp Confidential exhibition at the State Library of New South Wales: “Why do we really need to buy this mental rubbish from America? Why, we can produce perfectly good mental rubbish here in Australia’, and once they got the chance they did,” he says.

Rachel Franks, is a State Library curator.” women were either the femme fatale and buxom and blonde and quite gorgeous,”

As the industry grew, concerns were raised over the content, but the publishers managed to avoid censorship by staying just on the right side of the law.

Peter Doyle continues:“They were competing with one another to get as sexed up as they possibly could be, without bringing in any real trouble from the police or the censors.”

Once the regulations on the import of American comics was lifted, and with the advent of television, Australia’s pulp fiction industry went into decline and with it the striking stylied artwork.

The exhibition runs until May 10.