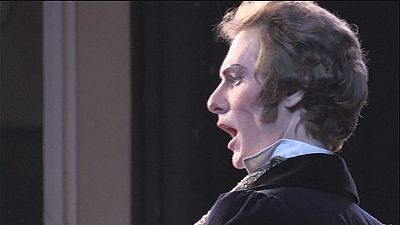 <p>As war unfolds on its streets, the <a href="http://www.donbassopera.com/ru">opera house in the eastern Ukrainian city of Donetsk</a> has managed to remain open against all odds. </p> <p>For the few dozen members of the audience who turn up, the opera’s weekly performances serve as a respite from the war raging outside between Russian-backed separatists and Ukrainian forces.</p> <p>None of the troupe members have been paid for months, all four conductors have left town and the singers take a risk every time they travel to work. But it is worth it says performer Artyom Yaroshevich: “Personally, I’m in shock. We have a situation here where a lot of people have left. It is unclear whether the opera house will get closed down. We are hanging in there without any help, any salaries. It’s very hard, of course. But you know, without working and singing, it would be the end, I guess.”</p> <p>The opera theatre in Donetsk once teemed with people, putting on several performances a the week.</p> <p>These days, the stalls are largely vacant. Performances are limited to weekends and or early afternoon, well before darkness falls and the streets grow even emptier.</p> <p>“Of course, it’s all a bit strange. The situation is dangerous, but we still want to bring some joy to our lives, some optimism, and we want to preserve our spirits. That’s why we come here,” said one audience member. </p> <p>According to another member of the audience, who brought her children to a performance, <a href="http://www.theguardian.com/music/2015/feb/02/donetsk-opera-ukraine-show-must-go-on">when you are surrounded by ugliness, beauty becomes something you cherish even more</a>.</p>