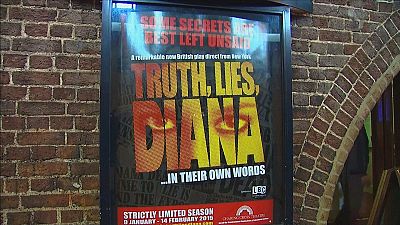 ‘Truth, Lies, Diana’ is a controversial West End show that promises to reveal “sensational new information about the death of Princess Diana”.

British playwright and actor Jon Conway stars in and directs his self-penned play that takes aim at the establishment, the press and the legal system.

Conway is convinced the investigation into the death of Diana, Princess of Wales needs to be reopened.

Conway says: “I think now is the time to tell the story. I think in the last few years, the British public has lost trust in a lot of the things the establishment has told them. They’ve seen a lot of historic cases brought to trial, on, I believe, much flimsier evidence than Diana. I think that the Hillsborough inquest has shown that you can have an inquest which is reinvestigated, and I’d like to see the same happen with Diana.”

Diana divorced Prince Charles in 1996 after a fifteen-year marriage. She and her lover Dodi Al-Fayed were killed the following year in a car crash in Paris.

The London play revives conspiracy theories that her death was ordered by the Queen’s husband Prince Philip, as well as rumours that Diana’s former lover James Hewitt could be the father of Prince Harry.

Actress Kim Tiddy, who plays the lead character, says: “Well, I think we live in a democratic society where we can ask these questions, and when the evidence is out there to be read, I think it’s only a matter of time before someone goes, ‘Hang on, there’s all these other investigations and things that have happened in the past that have come to light, what about this one?’”

MP Nigel Evans says: “People should be allowed to write what they like within the law, and I’m just going to come and see an artistic production… probably better to ask me [about it] after I’ve seen it. I’ve seen the controversy surrounding it but so what? It’s the theatre, it’s the arts and it’s what we do awfully well.”

Despite the official line that the crash was a terrible accident, many are still convinced Princess Di was killed. The show’s premiere attracted an audience of theatre-goers keen to find out more about the case.

The play comes at a time when the question of freedom of expression has been raised once again following the brutal killings of French journalists by Islamist terrorists in Paris.

“Democracy, freedom of speech… no one should be above the law, so if there are things that are not properly investigated, perhaps they should be investigated now,” said Rainer Kurz, who came to see the play.

‘Truth, Lies, Diana’ has opened to mixed reviews. While some have called it "tasteless", others said "its heart is in the right place, trying to do justice to "the People's Princess".