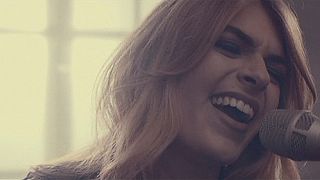 Laura Doggett has a lot to be excited about.

After supporting chart-topping soul man John Newman on his tour last autumn, the young British singer-songwriter will be releasing her debut album later this year.

She defines it as ‘an emotional journey’: “My album doesn’t really have a thing or a theme, it’s just pretty much how I feel on the day and a mix of loads of random influences. It’s really experimental. It’s more like my voice is the thing that’s carrying it through, but the songs are all about various different things and the sounds reflect that.”

The 21-year old realised her passion to make music at the age of 15 when her music teacher asked her to write a song for a cancer charity. She says that “when she played it to an audience and people started crying, (she) realised that touching people in that way was incredible”.

When it comes to songwriting, she says she’s inspired by everything around her:

“Someone said to me once, ‘Just make observations and talk about stuff and let people make their own judgements.’ So that’s how I’ve then gone about life. Just seeing things and writing them down and that’s allowed me to be freer in my mind too, because now I’m far less upset by things and I’m just really accepting and it’s just more talking about it and getting other people’s opinions and things like that,” she says.

Laura Doggett’s latest single ‘Old Faces’ was picked for the trailer of the long-awaited second season of the UK’s hit murder mystery series ‘Broadchurch’. Fans are now eagerly awaiting her first album due out this spring.