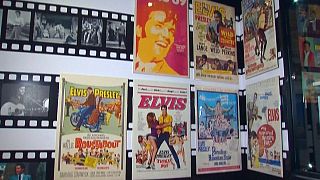 At The O2 in London, the largest Elvis Presley exhibition ever put on in Europe has visitors all shook up.

He's probably the only man that I would ever say was beautiful, without any embarrassment whatsoever.

It showcases over 3000 artifacts from the Presley family archives, some of which have never been shown outside of Graceland.

Several of his famous jumpsuits are on display, as well as guitars, jewellery, a letter from former President Richard Nixon and Elvis’s personal wallet, containing photos of his daughter Lisa Marie as a youngster.

But, it may be time to check yourself into Heartbreak Hotel if you’re a fan of Blue Suede Shoes – we’re unable to confirm whether they are on display at the exhibition.

On the bright side, enthusiasts can see the keys to the King’s famous Graceland mansion, as Angie Marchese, Director of Archives at Elvis Presley’s Graceland explained.

“We’re also going behind the scenes. We’re taking you into Graceland, where he entertained friends and raised the family. Everything from seeing his set of keys to Graceland, through (to) his wallet that he carried with him. And, opened up, there was a picture of his daughter”, she said.

“We also have things from when he was a child, that his mum saved: his third grade report card; his first grade crayon box… Really trying to give people a total sense of who Elvis was.”

Almost 40 years after his untimely death, fans still have a burning love for Elvis. David Wade runs the fan group ‘Strictly Elvis UK’. He met the singer at a concert and believes the star’s charisma is the cornerstone of his popularity.

According to Wade, his timeless hits and unique style mean there’ll never be another performer quite like The King.

He explained why the singer is always on his mind.

“What I remember probably as much as anything was the fact that, before he came on stage, I knew he was there”, he said.

“He was obviously behind the curtain, but the magnetism! Every hair on the back of my neck went up. The guy just had something that nobody else has and, of course, his voice, his looks… He’s probably the only man that I would ever say was beautiful, without any embarrassment whatsoever. The guy was beautiful. It was as simple as that.”

The exhibition is well-timed; January 8 would have marked Presley’s 80th birthday. But this is perhaps further proof of his enduring popularity and fame.