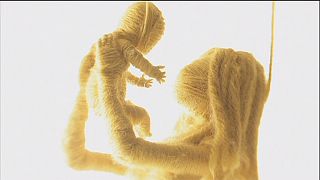 ‘Moving On’ a single from their album takes death as its theme. BAFTA-nominated animator, Ainslie Henderson created a remarkable stop-motion video for the song which is a story of life and death told through characters depicted with yellow yarn.

“Ainslie has been a friend of ours and he made these great videos that we had always loved and he tuned into some video that’s some kind of universal thing. I was told last night by a friend who works in a hospice for dying people that they’re using it in the main hospices in Britain, taking it in and showing it because people who are dying are going, “What’s dying?” Kids, young children, are going, “Mummy, what’s dying?” and not many people want to answer that question. This video, the doctors are tweeting about it, in tears, tweeting about this video,” explained band member Tim Booth.

Tears and many positive reviews for the album which is seen as uplifting. It is also personal as it was recorded in the wake of Tim Booth losing his mother and best friend in quick succession.

The band has been playing sold-out concerts in support of their new work. But, despite their success, they say their performances are still a work in progress.

“We are not looking for a slick, shiny performance up there from us. We’re not that kind of band that go up there an expect all the moves, all the shapes. We make mistakes. We have, hopefully, moments of genius as well thrown in there but there’s times where we make errors and things go a little bit wrong. I think an audience can relate to that,” said bassist Jim Gleenie.