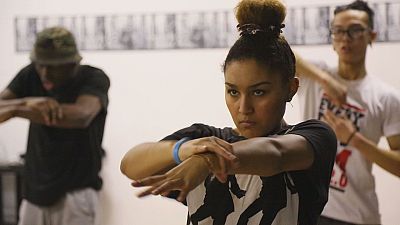 Krump is an urban dance craze that is sweeping Liege in Belgium. For Pierre Anganda it started three years ago when he helped create BBF 2.0, the first and only krump group in Liege.

He explained the popularity of the dance, which originated in the United States: “There are challenges. In krump there is the hype, which is a way of encouraging people, it’s shouting ‘Yes, let’s go!’ People, when they see that, they say ‘But they’re crazy, what’s going on?’ Because they aren’t used to it, they haven’t seen it before.”

Anganda said the dancers come from everywhere: “We have people from Vietnam, Congo, Belgium, Mexico, everywhere. Being together is our strength, which has kept us going.”

They don’t practice in a dance studio, but go to the railway station instead.

Dancer Pierre Anganda explained: “There are so many emotions. When I’m doing krump I feel happy as well as sad, real. Krump is life. When you dance, you feel things. Of course, it looks like an aggressive dance, but it can also express love and joy. You see it in the way we dance.”

Another dancer, Lauretta Parasmo, told us what krump means to her: “It’s true that it’s dominated by boys. I come from an African family, so perhaps it’s not approved of. You leave your day behind, all the problems and complications, with krump you leave them behind.”

This year BBF 2.0 will be one of the groups representing Belgium at an urban dance festival in Brussels; part of a project supported by the European Commission called ’7 Steps’.

Julie Daliers, from the 7 Steps project said: “Seven European partners are working together to encourage the development of dance in their countries. The aim is to create links across Europe, so that dancers travel a bit. The idea is that eventually they will go to London, Amsterdam, Copenhagen or Helsinki.”

French choreographer Grichka was invited to work with them: “It’s like the first hip hop message; instead of being a gangster, you can get it out of your system via dance. Whether it’s hip hop or krump, it’s still a way of expressing yourself and anyway, trying to walk a better road.”

Pierre Anganda of BBF 2.0 explained the advantage of taking part in the festival: “Visibility…. It’s a real victory. It shows that krump can grow anywhere, it takes krump to another level. OK, it’s a street dance, an underground dance, but there, now it’s in a theatre.”

Julie Daliers concluded: “With this we wanted to give young dancers an opportunity because they are really passionate about dance. So perhaps this experience will help them develop this form of dance even further.”