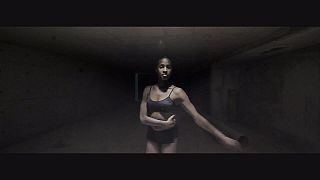 What is European identity in this time of uncertainty? The answer could very well be found on a theatre stage.

Katalin Szilágyi: “This play is about solitude, when we go to different places, convincing ourselves that things will be better. And then all of a sudden we realise our own loneliness and we hold on to people we have never met before.”

The play is called “Hungary”, the country the characters left in search of a better life somewhere in Europe. A reflection that emerges when Hungarian culture is facing tough times.

Katalin Szilágyi: “If I destroy a painting or break a piece of sculpture, it’s a crime, there’s a punishment. Culture has an abstract value, it’s something that happens between you and me.”

Where is Europe heading in this period of instability? “One Land, Many Faces” is a project supported by the European Commission in which a group of authors travels to different countries to meet young artists who are reflecting on the concept of Europe. This is why Jean Bofane, a Congolese writer living in Belgium, came to Budapest.

Jean Bofane: “Personally, I don’t really feel I have – I don’t know if you can call it patriotism – but let’s say, an identity. This European identity is vague. We are here to work on this identity or rather to research this identity. We are looking for Europe in fact. And to do this we have brought these artists together. Up until now only politicians have been able to express themselves.”

The writers involved are gathering inspiration to help create a play around the question of European identity to be performed at the end of this year. Jean Bofane has found one path to explore.

Jean Bofane: “I, as an African, have undergone a metamorphosis. I feel that there is a metamorphosis here in Europe. I find there is a lot of reticence, or rather resistance to Europe and this metamorphosis from all these people coming from elsewhere and who want to form this Europe.”

It’s a process that dancer Valencia James knows only too well. She’s from Barbados and she came to Hungary seven years ago.

Valencia James: “When I came here the first shock was the language and also the culture was actually more ‘closed’ than I would have imagined at first. I had many preconceived ideas about what it meant to be an EU country, the European Union. It’s so diverse. Different cultures, languages. I think european identity lies in diversity.”

Another artist who showed his work during the visit “One Land, Many Faces” was Martin Boross. He was stage directing a performance about a student revolution as a metaphor for a new balance of powers.

Martin Boross: “It’s about leadership and community. A community that wants to regulate itself, control itself.”

Katalin Szilágyi: “In the very moment when we don’t think together, people stop being tolerant with each other, they stop caring, it doesn’t matter anymore and this can create a bigger problem.”

Jean Bofane: ‘‘Perhaps we have to go through artists to bring out the sensitivity and discover what is in people’s hearts, to see what their desires and ambitions are for this Europe.”