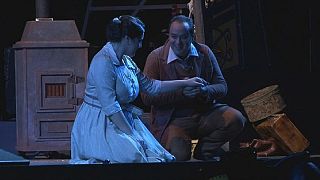 The tragic story of Mimì and Rodolfo in early nineteenth century Paris, and the unforgettable arias which made La Bohème immortal, have drawn thousands of opera buffs this year too at the renowned Puccini Festival in Tuscany, at Torre del Lago.

Stefano Secco who sings Rodolfo told euronews: “The music, the lyrics, the sets take you to another world… [for me, as a singer,] there’s a sort of letting-go as soon as the music starts. A second before I’m still in the real world, but the moment I hear the music, whoosh, I’m elsewhere!”

Maria Agresta, who portrays Mimi, said: “Mimì is like a little girl, a bit like I was – and still am – but her life turns out to be tragic. She starts in total lightness and freshness, typical of a girl, but she ends up dying. Trying not to think of illness, trying to ignore it and go on living – this is what Mimì does. Mimì is life!

“The most dramatic moments are also the most difficult to interpret because if you are affected by the emotion your throat tightens up and, alas, your throat has to be wide open and unobstructed to be able to sing!”

It is also possible to visit the villa in Torre del Lago where Puccini composed most of his operas. Its magical atmosphere and the memory of this genial composer are preserved by his granddaughter.

“Puccini had an extremely lively personality. He was a dynamic person. The first years that he stayed here he would cycle all the time. He used to go hunting, and fishing. Then the car arrived. He was not a dreamer at all, he was a very active man and he loved new discoveries,” said Simonetta Puccini.

“This was his favourite place, the home of his heart. He loved living here by the lake, ‘his’ lake, even though he was always on the move.

“I sometimes imagine that he appears from behind a tree. Or in these rooms, but maybe he is here.”

Stefano Secco said: “It’s wonderful on stage: it’s a neutral place where one can reveal something of oneself while hiding behind the character; when you sing it’s as if you said to the public: ‘hey, now I’m going to tell you a little about myself!’.”