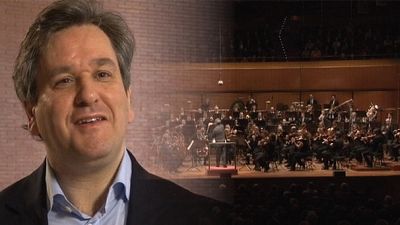 Mahler’s Sixth Symphony opened this year’s season at the Auditorium in Rome.

2011 celebrates the 100th anniversary of the Bohemian composer’s death.

He set the scene for euronews: “It starts with a march. You can imagine him walking into rehearsal, the manuscript under his arm, his head down, very short, big head, and he’s walking with a purpose, that was his way, and completely obsessed with what he’s doing; this followed by a beautiful romantic thing that expresses his wife, and happy domestic bliss.”

Pappano added: “The sixth symphony is absolutely the will, the desire to live, and to fight against the ultimate obstacle – death.”

Despite its name – the ‘Tragic’ – the Sixth was actually composed during a happy time in Mahler’s life: he was married, he had recently become a father, and he was a successful director of the Court Opera in Vienna. At that time, thanks to its flourishing arts, literature and music, the Austrian capital was the cultural hub of Europe.

Pappano is a perfectionist in rehearsal, telling the orchestra: “We’re trying to get the energy of Superman – what I hear here is only Clark Kent, not Superman!”

The Orchestra dell’Accademia Nazionale di Santa Cecilia is today one of the most acclaimed in Europe and Maestro Pappano’s contribution has been vital.

Pappano said: “Mahler is the one composer who is not afraid to express the deepest, the dirtiest, most neurotic part of the human psyche.”

He added: “So there’s a certain amount of discipline you need to get through to the end. The feeling of dealing with these emotions in the open, to a public, and for the musicians too, is unique.

“The last movement is an attempt to survive, and to live.

“I think in every symphony of Mahler it doesn’t matter how much energy a conductor has – and the musicians – by the time you get to the last movement you feel like you’ve got those last 100 metres to go on Everest, and you wonder ‘How do you reach there without having a heart attack!’.”

“We’re taught to be disciplined… Mahler gives us a choice of being real human beings, with all the faults showing.”

In this story you can hear parts of Gustav Mahler’s Sixth Symphony (Movement I, III and IV).

The Orchestra dell’Accademia Nazionale di Santa Cecilia will be touring Europe – the UK, Greece, Germany and Belgium – from 17 March to 28 March.