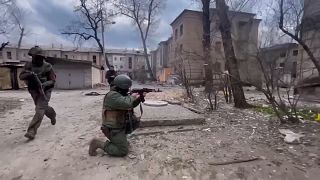 Russian state television on Wednesday broadcasted footage of what it said were rebels fighting in the eastern region of Luhansk.

The territories in the Donetsk and Luhansk regions have been under the control of Russian-backed rebels since 2014 and are recognised by Moscow as independent states.

According to state radio, the heaviest fighting is taking place in Popasna, Rubizhne and the vicinity of Severodonetsk.

On Tuesday, shelling in Rubizhne left one person dead and five injured, according to Governor Serhiy Haidai.