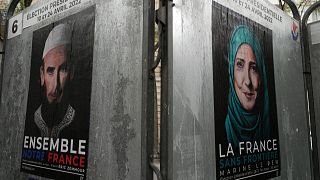 A portrait of the President of the French Republic, Emmanuel Macron, wearing a yellow Gillet and a black eye, this is one of the latest realisations of the street artist, Jaëraymie

A fan of collage and stencil, Jaëraymie intervenes in the public space to surprise passers-by, make them react to a news item, transmit an emotion or simply make them smile. This caricature of Emmanuel Macron inaugurates a series of portraits of politicians entitled Distorsions, which he then posts on his Instagram account.

Each work in the series is accompanied by a fictional story-telling. But also real polemical quotes from the protagonist. By taking them out of their original context, Jaëraymie wishes, in his own way, to give a voice to the invisible. "If you put yourself in the shoes of the people you are talking about, maybe we wouldn't have such harsh words.

A year and a half of work and preparation were necessary for the development of this project.