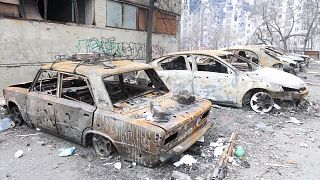 Mariupol, Ukraine's city most affected by the war

Residents of Mariupol have described widespread destruction and human loss as Russian forces continue their siege of the city on Monday.

Mariupol is a key goal for achieving uninterrupted control from the Donbas to the Crimean peninsula, as Moscow wants.

Though 50% of Marioupol's population had been evacuated, some 140,000 residents have fled the city, while another 170,000 remain trapped.

Russia has been targeting Mariupol, a port city of 430,000 people, for weeks.

Ceasefire negotiations remain difficult and do not stop the bombs from falling.