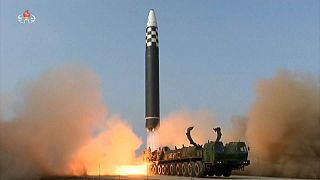 The Thursday launch was the first time Pyongyang has fired Kim's most powerful missiles at full range since 2017.

It appears to have travelled higher and further than any previous ICBM tested by the nuclear-armed country -- including one designed to strike anywhere on the US mainland.

The test-launch of the "new type inter-continental ballistic missile" was conducted under the "direct guidance" of leader Kim, KCNA reported.