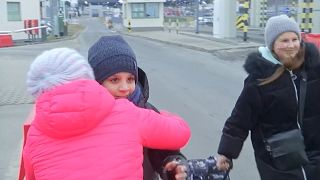 Women and children continued flowing across Ukraine's border with Poland

Women and children continued flowing across Ukraine's border with Poland on a cold Wednesday morning as Russia escalated its attacks in the country's east and moved troops closer to the capital Kyiv.

The refugees crossed at the Medyka border crossing where they were greeted by waiting relatives and friends as they reached safety.

The mass exodus of refugees from Ukraine to the eastern edge of the European Union shows no sign of stopping as they flee Russia's burgeoning war.

The UN estimates that more than 500,000 people have already escaped.