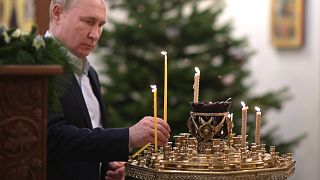 Russian President Vladimir Putin attended a Christmas service on Thursday at a church near his presidential home in the Moscow region.

The churches in Romania, Bulgaria, Cyprus and Greece mark it on December 25, along with other Christian denominations.

But a live broadcast of the service from Moscow's huge Church Of The Savior Of The Holy Face, indicated about half those attending had no masks or pulled them to their chins as they watched the pageantry of gold-robed priests including church leader Patriarch Kirill chant prayers and wave smoking containers of incense.

Although Russia's daily tally of new infections has dropped by about half since a month ago, to about 15,000 Thursday, concern is strong that the highly contagious omicron variant may be getting a foothold in the country.

Health Minister Mikhail Murashko said Thursday officials have detected omicron infections in people who had not travelled outside Russia.