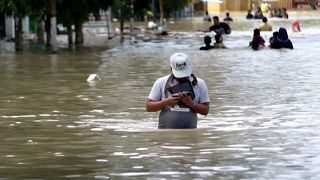 About 24,000 people have been evacuated and two children killed in floods on the Indonesian island of Sumatra, authorities said Tuesday.

The environmental NGO Walhi said the flooding was exacerbated by deforestation to make way for Sumatra's vast palm oil plantations.

Trees provide natural defences against flooding, as they slow the speed at which water rushes down the hills and into the rivers.