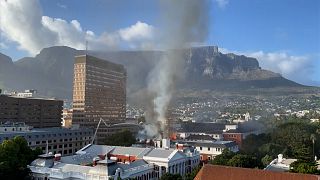 A major fire that erupted Sunday at South Africa's national Parliament complex in Cape Town has spread to the National Assembly.

The fire had been contained in the chambers of the National Council of Provinces, in the Old Assembly building, elsewhere in the complex.

Ramaphosa and many other high-ranking politicians were in Cape Town for the funeral service of Archbishop Desmond Tutu, which took place on Saturday at the city's St. George's Cathedral, about a block away from the Parliament precinct.