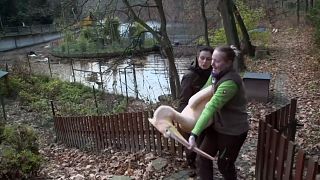 Zoo pelicans moved to heated enclosure ahead of winter

These pelicans are getting a new home for the winter. Keepers at the Liberec zoo in northern Czech Republic are catching all the big water birds living here to transfer them to a heated enclosure.

All were born and raised in captivity, although this species is not endangered. For these captive great white pelicans, migrating thousands of miles south every autumn is not an option.

But the animals aren't being cooperative. "This year it is more complicated than usual, we expected it would take less time but we have a lot of flyers here who make it difficult and they don't want to be captured," says Tesarova.

As temperatures drop, it's the right time for action for more than a dozen of keepers.

Keepers chase the pelicans in two kayaks and a boat on a lake in efforts to move them to a warmer place inside in the zoo.

In efforts to avoid injuring the birds, they handled them only with their bare hands -- a challenging task given the more than 3-metre wingspan of the species.

They also weigh about 15 kilograms (33 pounds).

Once the winter is over, the birds will be returned to their open-air enclosure.