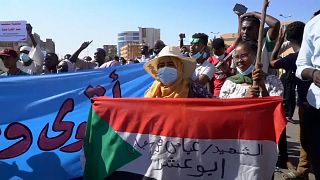 The violence came as thousands of pro-democracy protesters yet again took to the streets across Sudan to rally against the military’s takeover last month.

The coup has drawn international criticism and massive protests in the streets of the capital of Khartoum and elsewhere in the country.

At least three protester were killed, including two from gunshots and one from a tear gas canister in Khartoum and its twin city of Omdurman, according to the Sudan Doctors Committee.