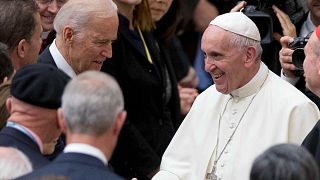 U.S. President Joe Biden gifted a command coin to Pope Francis during a meeting at the Vatican Friday.

The commemorative coin is usually presented to "warriors and leaders", Biden told the Pope adding, "you are the most significant warrior for peace that I have ever met."

At the end of the meeting the Pope thanked Biden for the coin, which depicts Biden's home state of Delaware and a reference to his late son Beau's military unit, the 261st Theater Tactical Signal Brigade.

The private meeting between the two lasted for about 75 minutes, according to the Vatican, an unusually long time for an audience with the pontiff.

The pair discussed the COVID-19 pandemic, climate change and poverty, before proceeding to the broader meeting with the first lady and top officials.

Biden and the pope have previously met three times but this will be their first encounter since Biden became president, and the first since 2016.

Biden is visiting Rome ahead of Glasgow, Scotland, for back-to-back summits, first a gathering for leaders of the Group of 20 nations and then a global climate conference.