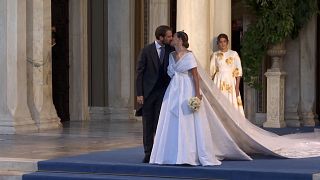 The youngest son of Greece's former King Constantine II wed a Swiss billionaire's daughter on Saturday in a ceremony in Athens.

Philippos tied the knot with Nina Flohr at Athens' Orthodox Cathedral as large crowds gathered outside the venue.

The couple had wed twice before Saturday's ceremony.

They first exchanged vows in Switzerland in December before holding another wedding in the UK months later.