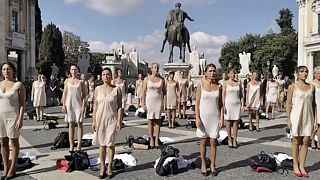 Dozens of former flight attendants of the defunct Italian airline Alitalia stripped off their uniforms Wednesday, wearing only underwear, during a protest in central Rome.

Long in financial trouble, the decades-old Italian airline made its last flight on October 14.

A new airline, ITA, began flying the next day, using some of Alitalia's planes.

It also bought the Alitalia brand, but is taking over fewer than 3,000 of Alitalia's 10,000 employees.

Union officials say those who will work for ITA are being hired at significantly lower pay scales.

Union leaders lobbied for the government to extend unemployment benefits to five years.