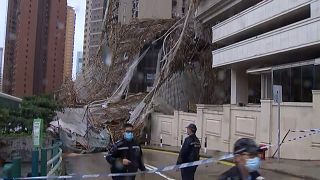 A giant wall of traditional bamboo scaffolding and netting was blown off the side of an apartment block in the storms.

According to local media, a trapped worker died, while other workers and drivers of two cars trapped under the collapsed scaffolding were rescued by firefighters.

The official Hong Kong Observatory issued a Black Rainstorm Signal, which indicates rainfall of more than 70 millimetres per hour across the territory and instructs people to "stay indoors or take shelter in a safe place".

The warning was later downgraded to a Red Rainstorm Signal, which indicates rainfall of more than 50 millimeters per hour.

The rain and wind affecting Hong Kong is being caused by Tropical Cyclone Lionrock and the northeast monsoon, the Observatory said.