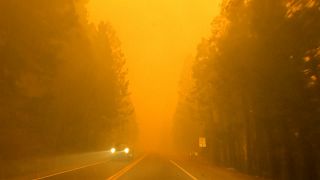 Some 14,000 firefighters facing changing weather conditions battled more than a dozen large wildfires across California, including a growing blaze that was slowly pushing toward the Lake Tahoe resort region.

Winds and temperatures were expected to pick up in coming days while humidity drops, adding to the challenges endured by crews working in rugged terrain.

Flames churned through mountains just southwest of the Tahoe Basin, a home to thousands and recreational playground for millions of tourists who visit the alpine lake in summer, ski at the many resorts in winter and gamble at its casinos year-round.

Echo Summit, a mountain pass where cliff-hanging U.S. Route 50 begins its descent toward Lake Tahoe, is where firefighters plan to make their stand if the Caldor Fire keeps burning through dense forest in the Sierra Nevada.

The fire is one of nearly 90 large blazes in the U.S. There were more than a dozen big fires in California, including one that destroyed 18 homes in Southern California, which has so far escaped the scale of wildfires plaguing the north all summer.