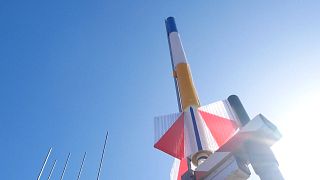 Dozens of rockets take off over the Peter and Paul Fortress in St. Petersburg, celebrating the 60th anniversary of Yuri Gagarin's space flight. On April 12, 1961 Gagarin became the first human to journey into outer space and he remains a national hero in Russia and the symbol of Soviet dominance in the space race.