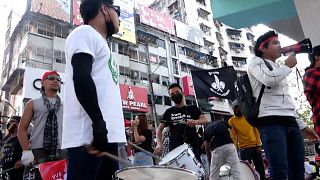 Youth-led protesters kicked off a rally in downtown Yangon with a distinctly musical feel, as a drumming combo performed a song called 'Revolution'.

In the northern Kachin city of Myitkyina -- which has seen bursts of violence from authorities -- protesters rode their motorbikes across town waving the Myanmar flag and flashing a three-finger salute, a symbol of resistance.

Mandalay saw a more sombre crowd at the funeral of Thet Naing Win, a 37-year-old man shot and killed Saturday when security forces opened fire into a crowd of anti-coup protesters.

"I beg for all to help see that my husband's case is ruled with justice," said his widow Thidar Hnin, adding that she wants to see "the dictator dethroned".

"This country is owned by the citizens," she told AFP.