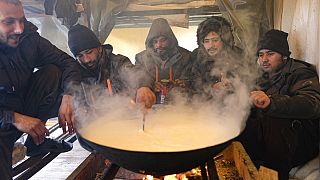 Migrants at a camp in northwestern Bosnia have complained of respiratory and skin diseases after spending days in makeshift tents and containers amid freezing weather and snow blizzards, aid workers said on Monday.

Bosnia has faced sharp criticism for leaving around 1,000 people without shelter after a fire gutted most of the camp on December 23rd.

Authorities initially said they would move the migrants to another location but they ended up setting up military tents at the site instead.

The Lipa site has also lacked basic facilities such as electricity or running water, with migrants left to light fires for days to protect themselves from the cold.

Many migrants at the camp said they have not showered for a long period of time, while some have washed outside despite the freezing temperatures.

On Monday, doctors set up medical tents for health examinations at the camp, handing out medicines and medical advice.

An emergency response team from the Danish Refugee Council have helped triage the migrants over the past few days, finding cases of scabies and pediculosis.

Others presented with persistent coughs and temperatures, both symptoms of coronavirus, but lack of testing supplies means medical teams have been unable to diagnose illnesses with certainty.

Bosnia has struggled with the influx of thousands of people who are trying to reach Western Europe through the Balkans.