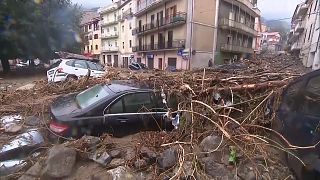 A massive mudslide covered streets in the town of Bitti in Sardinia after the area was struck by a storm on Saturday.

The small town in the Nuoro province was hit with heavy rains that caused powerful mudslides which covered swathes of the city centre.

A bridge collapsed and the main square in front the townhall became engulfed in mud.

Cars were also badly damaged with many becoming stuck due to the mudslide.

The Italian Civil Defense declared a red weather alert for Sardinia on Saturday and Sunday.

The stormy weather is also expected to reach southern Italy and particularly the Calabria region on Sunday.