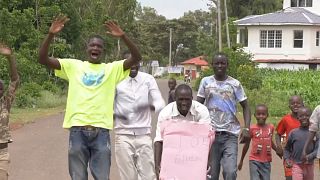 Locals in a Kenyan village linked to former US President Barack Obama held a mock election to show their support for the Democrats.

They put out cardboard boxes on the street in Kogelo, one marked Trump and the other Joe Biden, voting in favour of the latter.

"Joe Biden's presidency will unify the whole world and Africa as a whole," said Washington Oyamo, a resident of Kogelo.

Down the road, the ex-president's uncle Sayid Obama watched the US election coverage in his compound on a large screen.

He cheered and waved his fist in support for Biden.

"We have seen President Trump, the way he is treating the world is like he doesn't care, he is about himself and himself alone," he said.

Obama's father, Barack Obama Sr, grew up in Kogelo. Obama himself was born in Honolulu, Hawaii.