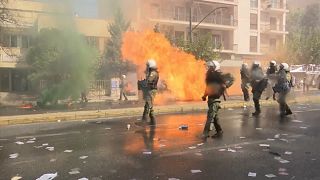 Clashes between police and demonstrators continued in Athens on Wednesday after a Greek court ruled that the far-right Golden Dawn party was operating as a criminal organisation.

After the landmark guilty verdict which followed a marathon five-year trial, police used water cannon and tear gas to disperse an anti-fascist rally of more than 15,000 people outside the courthouse.

A small group held their ground on the avenue, which had been closed off to traffic, throwing projectiles at the authorities.

Security had been tight for the ruling, with around 2,000 police deployed, as well as a drone and a police helicopter.