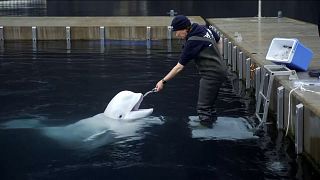 A pair of previously captive beluga whales have taken their first swim in their new open-water sea sanctuary off Iceland's south coast.

The whales — called Little White and Little Grey — were captured in Russian waters and sold to Changfeng Ocean World aquarium in Shanghai over ten years ago.

The mission to relocate them began when Changfeng Ocean World was acquired by Merlin Entertainment, a British corporation that owns Legoland and other theme parks.

The company, which has a policy against captive whales and dolphins, teamed up with wildlife charity Sea Life Trust to spearhead the effort.

The pair touched down at Iceland's Keflavik International Airport last June but plans to release them were postponed by bad weather.

Their new home is a 32,000-square-metre sea pen in a pristine bay called Klettsvik, accessible by whale-watching boats.

"We have a great opportunity to learn how these belugas, which have lived in a captive environment for most of their lives, how they adapt to a more natural habitat. So, what patterns do they develop? How do they adjust to the habitat they're in? And then, we can share that information to improve the welfare of more than 300 belugas that are in captivity around the world," says Audrey Padgett, general manager of the whale sanctuary.