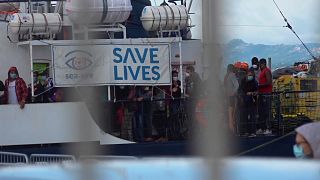 The Alan Kurdi ship of the German aid group Sea-Eye docked Friday in the Sardinia port of Olbia to disembark 125 migrants rescued in the central Mediterranean Sea.

Italy allowed the rescue ship to dock in Sardinia to escape rough seas and said the migrants could eventually disembark in Italy before being sent to other European countries.

Interior Minister Luciana Lamorgese told a parliamentary committee that Italy had already found European countries that had agreed to take in 100 of the migrants, with Italy taking 25.

She said if the bad weather and rough seas persisted for several days, the migrants could do their 14-day coronavirus quarantine on an Italian ship and then be immediately sent to other European countries.