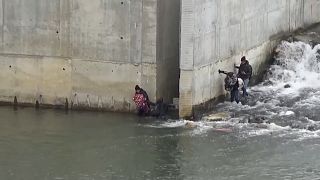 Migrants heading for Europe waded across the Evros River in northwestern Turkey on Wednesday as they attempted to reach the land border with Greece.

The river, which is also known in Turkey as the Meriç or Maritsa River, runs through Turkey and along most of the frontier.

Thousands of migrants and refugees have attempted to cross into Greece in the past week after Turkey made good on a threat to stop preventing the flow.

Turkish President Recep Tayyip Erdogan's action triggered days of violent clashes and scenes of chaos between authorities and migrants at the land border.

Hundreds more migrants have headed to Greek islands from the nearby Turkish coast in dinghies.

One child died when the rubber dinghy he was in capsized off the coast of the Greek island of Lesbos earlier this week.