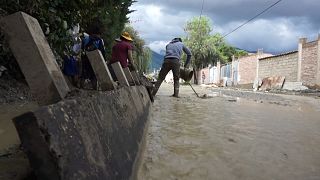 The Bolivian town of Tipuipaya in the central region of Cochabamba was evacuated after intense precipitations led the Taquina River to overflow.

Several residents trapped by the floods had to be flown out by helicopters.

The area was affected two years ago by a similar disaster which was attributed to deforestation work carried out to clear out land to build housing.