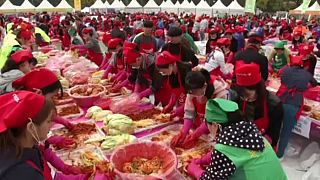 It's Kimjang season in South Korea where vegetables — usually cabbage — are marinaded in fermented seafood, spices and chilli and the end result is the national dish kimchi.

At the three-day Seoul Kimchi festival that is held each autumn visitors to the capital — and the few Koreans who don't know how to prepare their national food — have been receiving lessons.

So important is kimchi to Korean culture that the UN cultural agency UNESCO put it on its "Representative List of the Intangible Cultural Heritage of Humanity" in 2003.

In its description of kimchi's importance, UNESCO states: "It forms an essential part of Korean meals, transcending class and regional differences. The collective practice of Kimjang reaffirms Korean identity and is an excellent opportunity for strengthening family cooperation. Kimjang is also an important reminder for many Koreans that human communities need to live in harmony with nature.

"Preparation follows a yearly cycle. In spring, households procure shrimp, anchovy and other seafood for salting and fermenting. In summer, they buy sea salt for the brine. In late summer, red chilli peppers are dried and ground into powder. Late autumn is Kimjang season when communities collectively make and share large quantities of kimchi to ensure that every household has enough to sustain it through the long, harsh winter."

The five-year-old festival is also, in part, a response to South Korea's growing number of single households.

“Nowadays we have a lot of one-person households, and it can be a burden to make kimchi alone,” the city authorities said in a statement on the festival.

Around 5.5 million, or 10% of South Koreans, live by themselves.