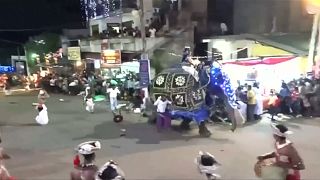 Seventeen people were injured when two elephants at a Sri Lankan street pageant went on a rampage on Saturday (September 7), local media reported.

TV footage of the parade shows one of the elephants bolting from a group of people before trampling bystanders as it ran down the road.

Starting from a 600-year-old Buddhist temple, the annual street pageant or Perahera, sees dancers and elaborately decorated elephants parade through the streets of Kotte.