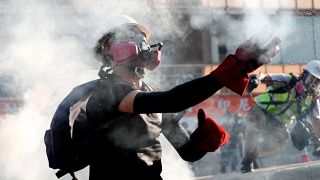 As the clampdown on anti-government protests in Hong Kong continues, protesters have been coming up with different ways to counter the widespread use of tear gas by the police. The newest strategy involves using a traffic cone to stop gas from spreading.

In recent weeks, clashes between police and demonstrators have grown increasingly violent.

Officers charged protesters who had occupied roads, surrounded police stations, and staged a rally near government offices on Monday. Police fired multiple rounds of teargas, pepper spray and rubber bullets and had arrested 82 people by the early evening.