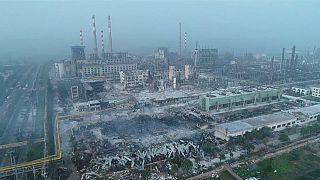 Aerial footage taken on Saturday has revealed the scale of devastation after a huge explosion ripped through a gas factory in central China's Henan Province on Friday.

The explosion took place at an air separation unit of the gas factory owned by the Henan Coal Gas (Group) Co. Ltd., located in the city of Yima.

At least 10 people were killed, with 19 severely injured and five others remaining missing, while many others are thought to have sustained injuries.

The core blast site has been reduced to ruins and covered by massive dust and debris, with all major facilities having collapsed.

Rescuers are continuing the search for missing people at the site, local authorities said, while investigations into the cause of the tragedy are underway.