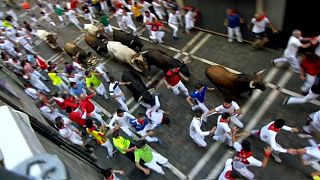 Five people were hospitalised on Saturday for injuries suffered on the seventh day of the running of the bulls at the annual San Fermin festival in Pamplona, Spain, the Red Cross said.

Each morning from July 7-14 thousands of people, many wearing traditional white shirts with red scarves, line the narrow streets of the medieval city to take part in the centuries-old tradition of running with the bulls.

In an 875-metre chase, half a dozen, specially bred aggressive bulls race from their pen along a winding course to the city's bull ring, with some people from the crowd running alongside while trying to dodge horns and stampeding hooves.

The Red Cross said none of the injured runners were gored by the bulls. Two suffered arm injuries after falling, two had bruises to their heads and one a torso injury.

The bulls are killed in their ring later in the day.