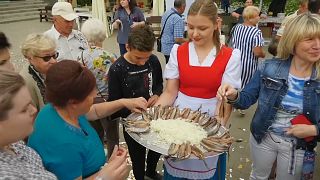 A special herring extravaganza has been held in Russia to celebrate the founding of a town near the capital Moscow.

It's the fifth consecutive year that Peresslavl-Zalesskiyse put on the fishy festival to toast its birth in 1152.

The idea is to recover the ancestral tradition and reinforce the herring as a symbol of the region.

Another particularity of the festival is the local speciality: herring ice cream. The unusual recipe was developed by the local fish restaurant.