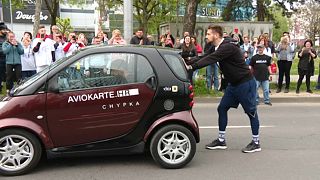 A young Croat has broken the Guinness World Record for pushing a car the furthest in 24 hours.

Tomislav Lubenjak, 27, from Zagreb, claimed the title by moving 730kg Smart car with its driver inside.

His challenge began on Saturday when an official stopwatch was started — each of Tomislav's footsteps was tracked by adjudicators.

By early Sunday morning, he surpassed the previous 82.28km record, set by Przemyslaw Marczewski from Poland, and at around 12.30 pm local time on Sunday reached his goal of 100 km.

The car's weight was set according to Guinness rules and the drivers had to change every four hours.

Tomislav took three-minute breaks every hour and refuelled with high-calorie tablets and sugar to give him the energy to complete the gruelling task.